Not Released
Sample In stock
Experience: Issues
Not Used
Get This Part

This is a composite part that consists of four pre-existing biobricks. It uses the luxR promoter from Pseudomonas aeruginosa in conjunction with LasR to report on the presence of Pseudomonas AutoInducer 1 (PAI-1). The device consists of the tet promoter (BBa_R0040), which is constitutively on and drives production of LasR all the time (BBa_C0179). Only in the presence of PAI-1 does LasR form an active complex and then activate the luxR promoter (BBa_R0062) thus leading to the production of GFP (BBa_E0040). 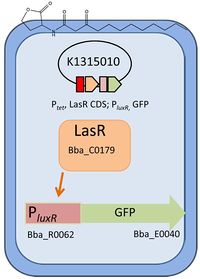