Not Released
Sample In stock
RFC: 25
Experience: Works
2 Uses
Get This Part

Laccase from Bacillus pumilus in RFC[25]

Laccase from Bacillus pumilus which degrades a wide variety of phenolic and non-phenolic compounds. This part is flanked by RFC[25] pre- and suffix for further protein fusions. This BioBrick was generated by PCR using BBa_K863000 as a template.

Laccases are an important group of effector proteins that can be utilized in bioremediation to degrade xenobiotics. They are copper-containing enzymes which catalyze the oxidation of a wide range of substances. It was interesting for us as the two important xenobiotics ethinylestradiol and diclofenac can be degraded using laccases and the general function can easily be investigated using the commonly used substrate ABTS.
During the planing phase of our project we decided not to add a new laccase to the Parts Registry but instead to continue the work on the best availible laccase. The iGEM Bielefeld Germany has created BioBricks for five different laccases during the last summer. So we contacted this iGEM team and got the advise that the laccase derived from Bacillus pumilus BBa_K863000 seems the best choice for our effector collection. As we wanted to try this effector protein in different localisations such as cytoplasmatic, secreted or receptor bound we converted this enzyme to RFC[25] in order to make it compatible for protein fusions.

Protein Data Table for the Laccase from Bacillus pumilus BBa_K863000 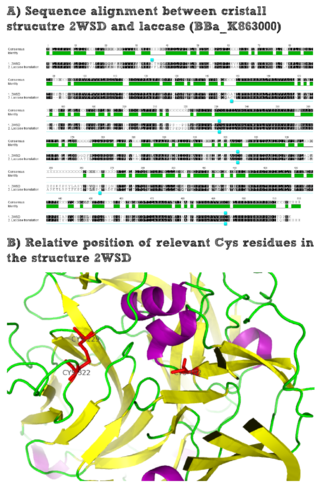 For the production of effector proteins it is always essential to know whether they are naturally cytoplasmatic or whether they are secreted. Cytoplasmatic proteins usually do contain a higher portion of cysteine residues as they are a normal amino acid residue as no disulfide bridges can be formed under the reducing conditions of the cytoplasm. In contrast secreted protein often do contain disulfide briges which make them more stable to environmental stress. The disulfide formation is possible for the secreted proteins as the oxidizing conditions facilitate the bridge formation. On the other hand there is a selection pressure for secreted proteins not to contain exposed cysteine residues that are not involved in the formation of disulfide bridges. Such free cysteine residues would leed to aggregation of proteins which would probably hamper their activity.
Thus it was an important point to find out whether the used laccase is a secreted enzyme as this would increase the chance to express it in a functional form on the extracellular part of our moss and on the other hand it was also an important information for the production of recombinant protein. To solve this question we did an alignment of the laccase BioBrick and the closest related solved structure. The sturcure contains disulfid bridges for example Cys229-Cys322. The comparison of the position of these residues within the amino acid sequece alignment shows that these residues are conserved and it can thus be assumed that the laccase BioBrick we used also contains disulfid bridges that have to be formed under oxidizing conditions and will increase the stability of our effector protein.
We thus used 10 mM of potassium ferrocyanide which is a milde oxidisation reagent subsequent to the cell disruption and did not use any 2-mercapto ethanol as a reducing agent during the protein purification. 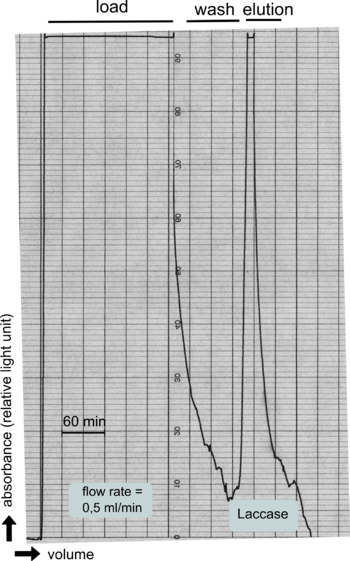 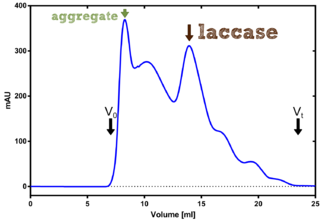 Figure 11a: Size exclusion chromatography on a Superdex 200 10/30 column 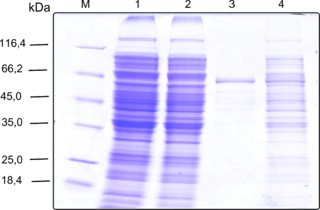 Figure 11b: SDS-gel of recombinant Laccase with the marker (M) followed by the the cell lysate, concentrated protein throughput of the streptavidin affinity column, 1 fraction of the eluate unconcentrated and concentrated

As all the other effector proteins we performed a first analytical preparation in a 2 L LB-media scale in order to learn about the protein and then up-scaled the production to 6 x 2 L of LB media. The production was carried out cytoplasmatically in E. coli BL21. The culture was grown to OD 0.8 was induced using 5 mM of arabinose and the protein production was carried out for 5 hours. Cell disruption was performed using ultrasonic sound and subsequently the cell lysate was dialyzed against 1 x SA-Buffer that contained additionally 5 mM of the milde oxidation reagent potassium ferrocyanide in order to form the disulfide bridges present in the laccase structure (see previous paragraph).
The Streptavidin affinity chromatography yielded a satisfying elution peak that was then concentrated using a centrifugal filter unit (MWCO: 30 kDa). The concentrated protein was then applied to a ÄKTA purifier equipped with a Superdex 200 10/30 size exclusion chromatography column. The chromatogram shows three major peaks with a first peak near the void volume that corresponds to aggregated protein >600 kDa, a second elution peak of high molecular protein and a third elution peak corresponding to the desired laccase protein. This assumption was made on the knowledge that on this column proteins of arround 50 kDa elute at an elution volume of 14 to 15 ml. This assumption was subsequently confirmed by ABTS activits assays with all elution fractions (see next section).

Figure 12: Mechanism of the oxidation of ABTS which is a model substrate for laccase activity 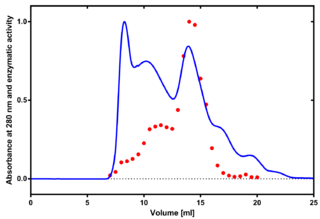 The enzymatic activity of the purified laccase was determined by the ABTS-assay. In a first pre experiment the appropriate dilution factor was determined to 100-fold. The elution fractions obtained from size exclusion chromatography were diluted 1:100 in PBS and in an ELISA plate 100 µl of the enzyme and 100 µl of ABTS substrate were mixed and a kinetic measurement at 405 nm was performed. The absorption at 280 nm in the SEC chromatogramm (blue) identifies three main protein peaks, with a first peak corresponding to aggregated protein, a shoulder which also corresponds to higher molecular protein and a single peak which was proposed to be the monomeric laccase. The relative activity obtained for the different elution fractions was plotted in the same diagramm and shows a clear peak which matches the laccase peak in the SEC. Beside this major peak a second smaller peak of active fraction was visible which appeared in earlier elution fractions and might correspond to dimerized laccase. As the laccase is a secreted enzyme which also bears disluphide bonds it was produced in the cytoplasm and subsequently it was oxidized to form the proper disulphide bond. As this process might be only partial there is a possiblity for the formation of disulphid dimers. Never the less the fractions 14 to 17 were pooled for further experiments as they showed the highest enzymatic activity. The protein concentration of the pooled fraction was determined to 0.48 mg/ml after SEC.

Characterization of the enzyme

The enzymatic activity of the laccase BioBrick was investigated under different conditions as this was important for our filter model in which we try to simulate the application of enzymatic activity for bioremediation purposes. The first activity assays were dilution series experiment in which we wanted to determine the appropriate amount of protein which we had to apply in the assays. We found the 1:100 dilution of the prepared protein (0.49 mg/ml) to a good choice and thus performed all experiments with this concentration. 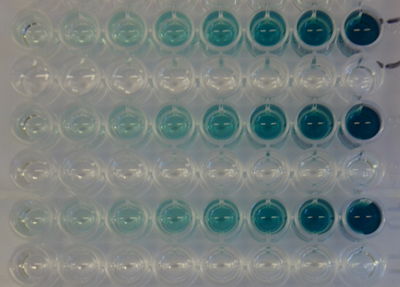 For a detailed evaluation of the results please see our enzyme kinetics modeling.

Figure 15: Reaction of Laccase with a serial dilution of ABTS (left) and negative control without the enzyme (right)

Activity dependency of the laccase on pH values

Secondly we did a series of experiments in which we determined the effect of the pH on the enzymatic activity (Figure xxx). For these experiments 100 µl of various 500 mM buffer (various pH), 50 µl of ABTS substrate (0.5 mg/ ml in ABTS-bufer from Roche) and 50 µl of laccase which had been diluted 1:100 were incubated. The absorbance at 405 nm was then recorded over the time in an 96-well plate. The change in absorbance over time is shown for every condition as the average of three measurements with standard deviation. The resulting plot shows that there is an optimum for the pH which is at 4.5 to 5. This matches very good the acidic conditions present in the apoplast of the plant as for example also the used Knop media is adjusted to a pH value of 5.6 to 5.8.

Figure 16: Reaction of Laccase with ABTS in different pH buffers. Absorbance curve with laccase on the lefe; control with PBS on the right

Activity dependency of the laccase on the ionic strength

Beside the substrate dependency and the pH value for optimal catalysis the dependency on the ionic strength of the media was of interest for our project as well as for further users of this BioBrick. We thus incubated the recombinant laccase (1:100 dilution) with ABTS substrate and various concentrations of sodium chloride. This was done in triplicates and for a control without the enzyme and with PBS instead.

Figure 17: Reaction of Laccase with ABTS at different salt concentrations. Absorbance curve with laccase on the lefe; control with PBS on the right