We as iGEM TU Eindhoven 2015 used NanoLuc in a BRET sensor together with mNeonGreen. Bioluminescence Resonance Energy Transfer is a physical process which can take place between fluorophores when they are in close proximity (1-10nm) [1]. An electron which has been transferred to its ‘excited state’ falls back to its ‘ground state’. The energy that is released by the electron falling back to its ground state is normally released in the form of light. In the case of Resonance Energy Transfer, however, the energy of the electron falling back to its ground state is coupled to a transition of an electron in the RET Acceptor from its ground state to the excited state (see Figure 1).

The main goal of our project was to design a universal, modular biosensor that could detect molecules by using aptamers. NanoLuc worked very well for us. We've inserted NanoLuc in a pETDuet-1 vector together with Outer Membrane Protein X (OmpX) and a BsoBI-linker, which is a long and flexible GGSGGS-linker with two BsoBI restriction sites. Several experiments gave very strong results for NanoLuc. Together with an OmpX-mNeonGreen construct, BRET can take place between the two fluorophores. 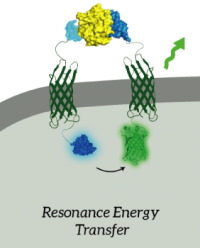 Figure 2: The OmpX-NanoLuc construct together with the OmpX-mNeonGreen construct. When in close proximity, BRET takes places from NanoLuc to mNeonGreen. 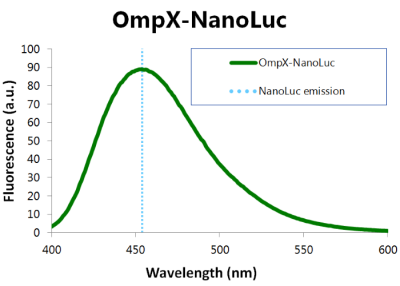 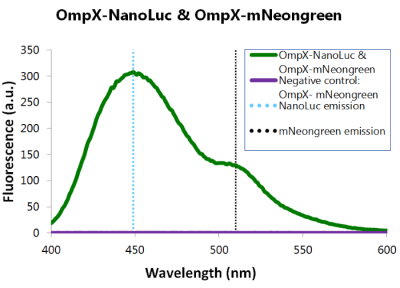 Figure 4: Bioluminescence results of our complete construct, containing both NanoLuc and mNeonGreen.

Liquid culture on 96 wells plate When 0,6 < OD600 < 0,8, induction with arabinose or IPTG Incubate 5h at 30°C; for BBa_K325909, measure the kinetic during the 5h of induction and take the maximum value
Add 50µL of NanoGlow substrate (Promega) for 50 uL of bacteria
Measure kinetic over 120 min and take maximum value for culture with BBa_K1159001 and T7-nanoluc

Comparison of the relative light unit 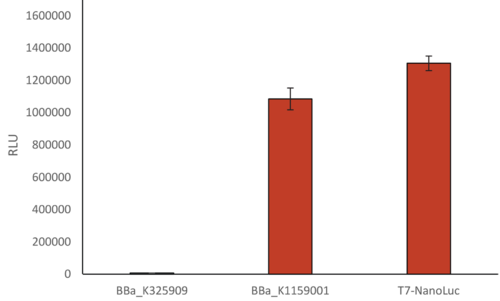 Comparison of the relative light unit using 3 differents Biobricks:Induction of BBa_K325909 and BBa_K1159001 with a solution of arabinose 1%, and a solution of IPTG 1 mM for T7-Nanoluc

Relative Light Unit depending on percentage of arabinose 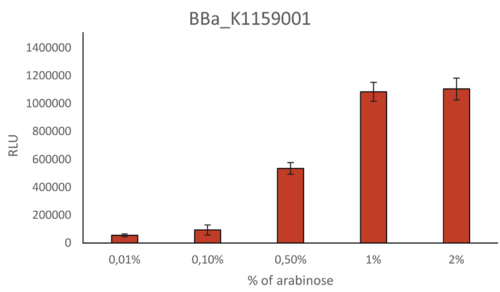 In conventional chassis such as E. coli or S.cerevisiae fluorescent proteins are often used as reporter genes to validate genetically modified organisms. However measuring fluorescent activity may not be the best option to choose for phototrophic organisms, because of the absorption caused by the absorption of the photosynthetic pigments of the host organism. The table below shows the absorption spectra of UTEX 2973. As one can see, reporters such as mTurquoise and YFP underlie a rather high background noise caused by the absorption from the pigments at their ideal wavelength (YFP: 515nm and mTurquoise: 445nm). 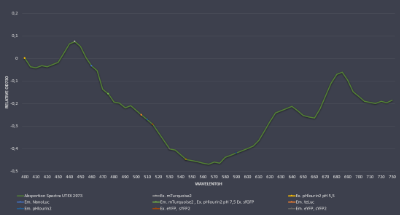 Fig.1-Peak of different fluorescent reporters mapped on the absorption spectra of UTEX2973

NanoLuc promises to be a more ideal reporter gene, because there is almost no background noise for this measurement method. To characterize the chosen part from the registry we firstly measured the activity in E.coli before we went any further. As described in the entry above a dilution series was done to determine the proper dilution for the measurement. After that we mixed 50µl of culture with 50µl of NanoLuc substrate. Our results were remarkably good, because we needed to dilute the cultures 1:100 in order to get a signal that is under the maximum value, which our plate reader could handle. The results seen below were achieved with cultures grown to OD ~0,8 (600 nm) and the measure points were taken after 39 minutes after treating the cultures with the NanoLuc substrate.