Flaving Containing-Monooxygenase (FMO) is an enzyme that can be used to produce indigo. The enzyme is involved in the conversion of indole to indoxyl using NADPH as its co-factor. And upon exposure to oxygen, indoxyl spontaneously dimerzes to indigo. Specifically, this is the pathway being employed:

We sought out to characterize the activity of this enzyme by verifying indigo production, kinetics data, titers, and toxicity tests. In order to carry out our tests, we cloned this enzyme into TG1 strain strain E. coli with an Anderson Promoter (BBa_J23100). The following parts diagram contains the schematic of our plasmid.

We ran standards of our bio-indigo (E. Coli lysate) against purchased standards of indigo, indirubin, and isatin on the HPLC and LC-MS. We observe a similar peak between the standard indigo and bio-indigo curve, confirming indigo production.

By running a standard of indirubin, a side product of indoxyl's oxidation, we were able to see what proportion of our final solution was indigo vs. indirubin by comparing the Area(%) under the curve. This data is shown below, and shows that we have a significantly larger amount of indigo being produced in comparison to indirubin, the predominant side product.

We can tell that we are producing appreciable amounts of indigo compared to other side products in the cell.

Our next step was to measure the amount of indigo we are producing. We used the same plasmid as above to try and constitutively express large amounts of FMO. We tried a variety of conditions to try to maximize our indigo production as shown below: 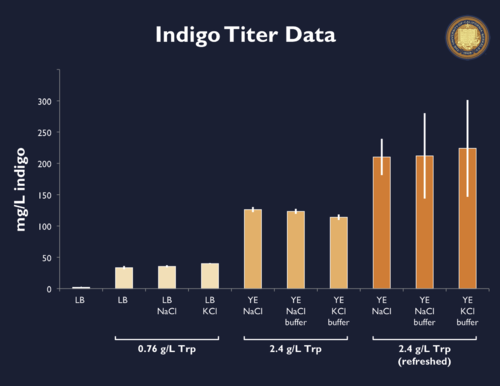 All cultures were grown for 30 hours at 30 C. LB stands for standard LB Broth as growth media, while YE refers to Yeast Extract. With increasing concentrations of added tryptophan (Trp), we are able achieve corresponding increases in indigo production as measure in mg/L on the Y-axis. Refreshed tryptophan media indicates that after 13 hours of growth, bacteria were supplied with fresh growth media containing the same amounts of tryptophan added initially. Though other conditions such as varying salts (NaCl vs KCl) thought to affect tryptophan transporters and buffering conditions were tested to see if they affect indigo production, the largest effector was clearly the amount of tryptophan. This makes sense as tryptophan is the raw material used by E. coli to produce indole, the naturally occurring substrate used by our heterologously expressed FMO. The largest titer we were able to achieve was approximately 230 mg/L of bio-indigo

First, we wanted to answer if the generated indigo is toxic to our bacteria. If so, large scale production of indigo may be difficult. To do this, we did a time course experiment in which we compared the number of bacteria on a hemocytometer. The two constructs we compared were:

The mFMO part has been mutated in three places to eliminate all indigo-producing activity. The construct containing mFMO was used as a negative control as it is almost the same construct except for the three mutations specified on the mFMO part page. Indigo production in bacteria containing either of the two plasmids was measured over the course of 24 hours straight at 30C in plain LB media with .74g/L added tryptophan. The results are shown below. Growth rates for both cultures were measured by counting the number of cells on a hemocytometer over time. From this, there is no clear indication that indigo is toxic to the cell as the growth rates for the control and indigo producing cells were roughly the same.

Lastly, we wanted to measure how quickly FMO was able to generate indigo from indole. We used Michaelis-Menten kinetics to model the behavior of FMO with various concentrations of indole substrate to determine the Km and Vmax of the enzyme. To do this, we first needed to obtain purified FMO enzyme. We used the T7 expression system and chemically competent BL21 cells to express a His6 tagged FMO and purify it using a nickel column. The plasmid we used is depicted below.

We then generated a Lineweaver-Burke plot and a time vs. rate plot to describe FMO kinetics. Note that our data informs about the rate of indigo generation and not indoxyl, and thus we are not specifically calculating the rate of oxidation from indoxyl to indigo. We refer to part BBa_1131001 in our toxicity experiment as the mutated, knocked out version of FMO. This part can be found here.