The activity of pGAL1 promoter was characterized by transforming pGAL1-GFP plasmids into yeast S. cerevisiae and measuring the evolution of fluorescence in time. 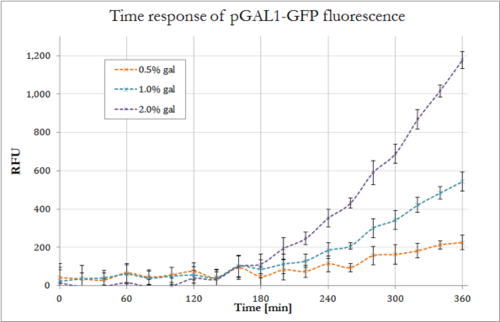 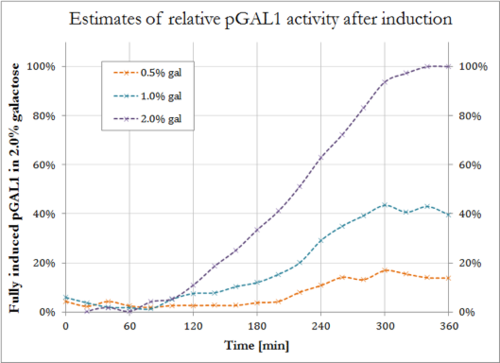 3 different concentrations (0.5%, 1%, 2%) of galactose were added to 100 µl yeast culture in SD min medium. We measured the fluorescence in 20 minutes intervals for 6 hours using a plate reader.

Our measurement showed that the higher concentrations causes quicker and higher activation of the promoter.

Since 2% appears to be the convenient concentration for maximal activation of the promoter in our experiment we used it as a reference and related the activity of other concentration to this concentration. Results are displayed in the second graph.

The third graph show the static response characteristic, dependence of activation on concentration, related to the 2% concentration. 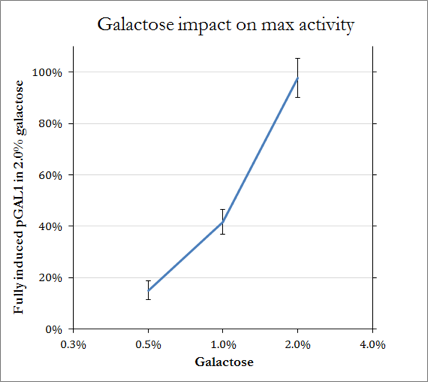 Fluorescence Analysis of GFP expression as regulated by GPD and GAL Promoters: S. cerevisiae yeast strains containing either the GPD-GFP, GAL-GFP or GAL+Kozak-GFP construct were cultured overnight at 30 degrees Celsius in either YPD (dextrose), SC-raffinose or SC-galactose media. These were diluted 1 in 10 in their respective media and grown for 3 hours at 30 degrees Celsius into log phase. The cells were then spun down and samples were collected at 0 hours. The remaining cells were resuspended in SC-galactose media and left to grow at 30 degrees Celsius for 3 hours. The cells were spun down again and samples were collected at this 3 hour time point. The samples were fixed in paraformaldehyde and visualized under a fluorescence microscope under the GFP and DIC settings. Acquired images were then color-combined with red representing DIC and green representing GFP.

As a follow up to this experiment, we did a quick check of the BBa_J63006 GAL Promoter, but results were again not conclusive; there does not seem to be a clear induction of GFP expression when grown in galactose media.

Fluorescence Analysis of GFP expression as regulated by the GAL Promoters: S. cerevisiae yeast strains containing the GAL+Kozak-GFP construct were cultured at 30 degrees Celsius in either YPD (glucose) or SC-galactose media for 3 hours into log phase. The cells were visualized under a fluorescence microscope under the GFP and DIC settings. Acquired images were then color-combined with red representing DIC and green representing GFP.

DISCLAIMER: It may be that there was some error in cloning. We have to sequence to find out if we placed the BBa_J63006 GAL Promoter accurately into our GFP reporter construct. Nonetheless, PCR has been performed to confirm the presence of the BBa_J63006 GAL Promoter upstream of the GFP reporter. We are currently sequencing this construct and will have details at the Regional Jamboree 2011.

Another potential explanation for why this part may not have worked compared to our own BBa_K517000 GAL Promoter is that the kozak sequence may be interfering with expression of protein downstream; since the kozak sequence itself carries an ATG, it may be possible that this is competing with the ATG of the GFP to result in less expression even under galactose induction. 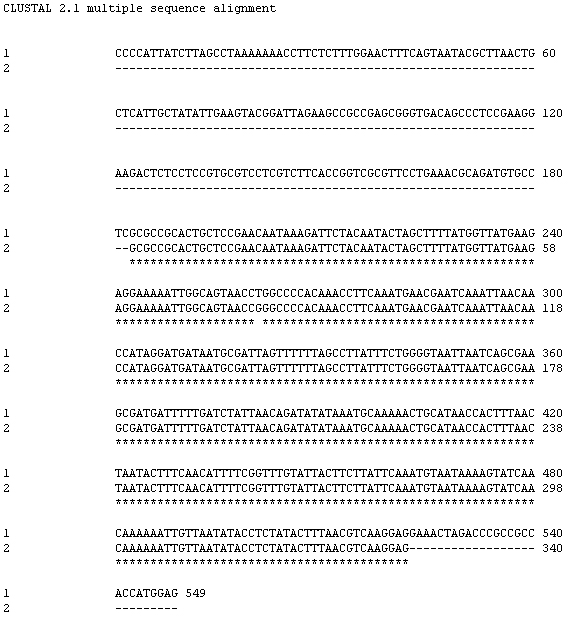 We aligned this (1) BBa_J63006 GAL Promoter+Kozak Sequence against our (2) BBa_K517000 GAL Promoter. There is 180bp upstream sequence present in (1) that is absent in (2), as well as the 27bp Kozak Sequence downstream of the identical sequence regions.

Our part is Part: BBa_K2009363 ,designed by Kaiyue Ma. We construted this composite by ligating GAL1 promoter + Kozak sequence (Part:BBa_J63006) and (2) GFP (Part:BBa_E0040). However, the ATG inside the KOZAK sequence won't be in the same reading frame as the ATG of the downstream coding sequence, so a frame-shift mutation is inevitable. To solve this problem, we add a base pair after the Kozak sequence so that the ATG can be in the same reading frame and the GFP can be expressed properly. What’s more, this part become “ready to use”, which means the GFP sequence can be directly altered by other functional parts and the sequence will be expressed properly.

We used this promoter in order to express long hairpin RNA in yeast. Long hairpin RNA targeting B. xylophilus AK1 mRNA or GFP mRNA was cloned downstream of the promoter and introduced into the 2-micron high copy number plasmid of budding yeast, and subsequently expressed in yeast. The GPD promoter (BBa_K517001) was used as a control. For the data, please refer to the GPD Promoter page ( BBa_K571001 ) and our Wiki Result. By feeding yeast expressing dsRNA to nematodes, we investigated whether the dsRNA expressed by these promoters is fatal to pine wood nematodes.