This sequence corresponds to the 1457 bp directly upstream of the start codon of the ADH1 gene in S. cerevisiae.

Comparison of the ADH1 and TEF promoters activity 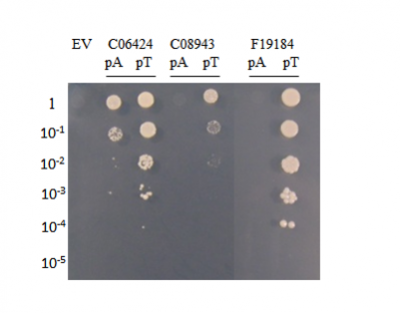 The transformants were cultivated in YNB medium with maltose as carbon source. After 48 h of culture, cells were centrifuged, washed twice with distilled water and its OD600 was standardized to 10. Several decimal dilutions were prepared: 100, 10-1, 10-2, 10-3, 10-4, 10-5. After the dilutions, cells were spoted in drop test on YNB agar plated with 2% glucose.

The analysis of promoter strength and its usefulness for expression of hexose transporters from Y. lipolytica in S. cerevisiae EBY.VW4000 was analyzed. The 2µ plasmid (pRS426) was used with ADH1 or TEF promoter. After incubation of S. cerevisiae transformants for 48 h at 30°C growth of transformants expressing each of the three transporters under TEF promoter was observed. In turn, expression of only YALI0C06424g transporter was observed when ADH1 promoter was used. The results clearly indicated that AHD1 promoter is not strong enough and thus not appropriate for the analysis of heterologous hexose transporters in the S. cerevisiae EBY.VW4000.