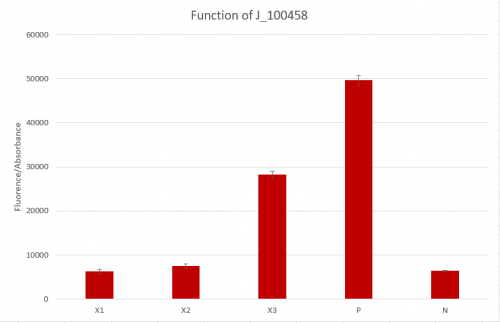 After ligating our RBS into JM109 E.coli, we synthesized experimental and control cultures on agarose petri dishes. The positive control plasmid received J100458 (mScarlet) and the negative control plasmid was cut with the BsaI restriction enzyme but no new sequence was ligated in. After 6 days of growth, we collected 3 individual experimental colonies and positive and negative control colonies and grew them overnight with LB media and ampicillin in a test tube. We then measured the fluorescence and absorbance of these using the Synergy machine, divided fluorescence by absorbance, averaged three different samples, and calculated standard error and deviation.