Our team helped increase characterization of the part BBa_C0161 (LuxI). This part was tested against its ability to induce the part BBa_F2620 by the Canton Lab(MIT). This part outputs PoPS as a Receiver Device combined with LuxR. An induction test on BBa_F2620 had been done by Dr. Barry Canton (2008), but they tested GFP production over various AHL concentrations, while our test was an 8-hour GFP read over time for 2 AHL concentrations (10 and 50%). In addition, the Canton test utilized synthetic 3-O-C6-HSLs while our test utilized AHLs produced via an E.coli chassis. A visual induction test was also done, plating the Sender alongside a GFP positive control, negative receiver control, and F2620.

As shown below, Lux is able to induce F2620, as some colonies in the top right section began producing GFP. This is the expected result, since the Receiver of this system naturally accepts 3-O-C6-HSLs. 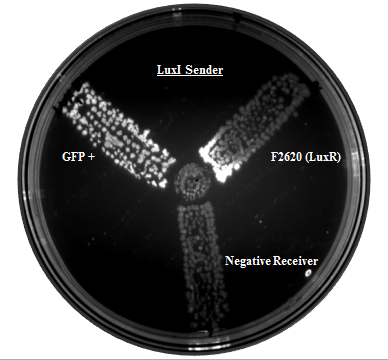 The figure below compares LuxI at 10% and 50% concentrations. LuxI is shown to induce F2620. This affirms that F2620 is capable of being induced by LuxI synthesized within BL21(DE3) E. coli. 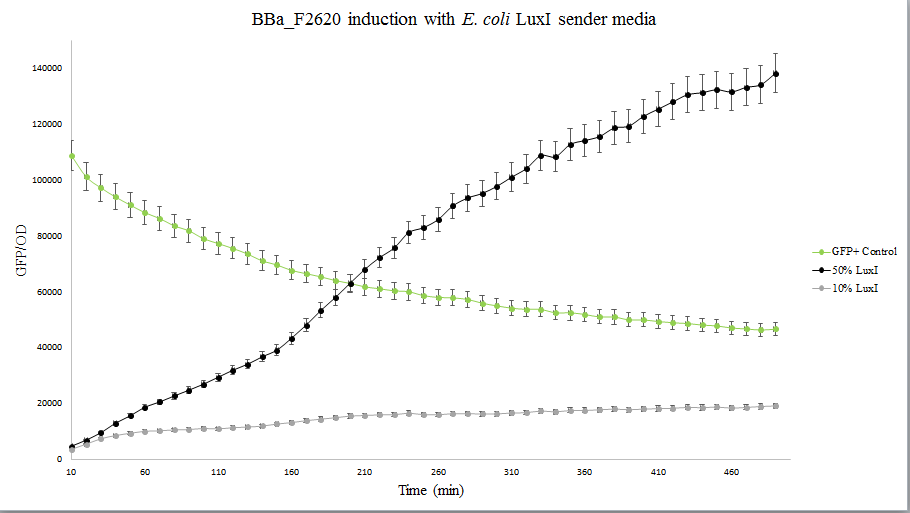 The final experiment conducted using this part aimed to determine proper safe disposal procedures for the 3-O-C6-HSL. This AHL molecule is capable of crosstalk with potentially pathogenic strains of bacteria, and proper disposal of these AHLs should be an important biosafety measure taken. S.A. Borchardt had already tested the susceptibility of AHLs to bleach and found that 3-oxo AHLs were easily broken down by bleach while other AHLs were not. Our experiment aimed to test the application of standard EH&S sanitation protocols on AHLs (10% bleach solution and autoclaving). The figure below indicates that AHLs produced by LuxI were not properly deactivated by a 10% bleach solution. This was NOT the expected result, as LuxI produces a 3-oxo AHL, which should have been destroyed by bleach. 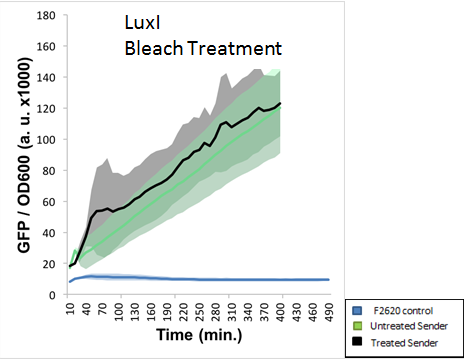 A standard 15 minute Liquid autoclave cycle was also used to treat an extracted AHL solution. The figure below indicates that LuxI was nearly completely destroyed via autoclaving. This was the expected result, as the high pressure and temperatures should deactivate any AHL molecules present. 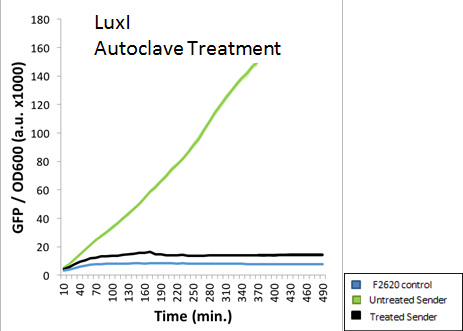 The results demonstrate that Lux was able to effectively induce F2620 after being extracted. The Lux results were not consistent, which showed decreased induction when treated with bleach, but no evidence of complete AHL inactivation. According to the autoclave results, a standard 15 min liquid procedure is able to degrade nearly all AHLs. The extreme pressure and temperature generated by the autoclave was more than enough to remove any threat posed by these AHL samples. In summary, our data suggests that autoclaving will ensure at least some inactivation of AHLs, while bleach may have no effect at all on the degradation of AHLs.

We use LuxI supernatant to induce LuxR to respond and express sfGFP.The test group is compared with 10-7M 3OC6 HSL induced group and no induced group(blank group). The result is shown by dividing the fluorescence intensity by the OD600, both measured in the transformed E. coil. (Figure 2) 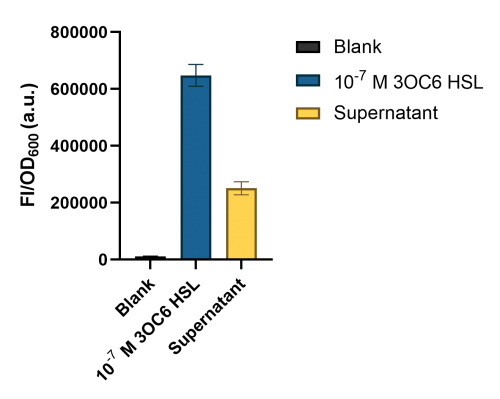 Figure 3: sfGFP is expressed under the regulation of LuxR between E. coli in a single gel bead. Two parallel groups are given and the above two are control groups.

More detailed information can be seen on the composite page BBa_K4115040 , which is submitted by ShanghaiTech_China 2022.