Registry Logo Redesign Contest! Win an iPod or a Wii!

Go ahead, take a look at the upper left corner of our beloved Registry website. If you're like us, you're probably thinking the black book with the ghostly cell-gear and the "Catalog" title is looking a little outdated. Ok, more than a little outdated. We couldn't agree with you more, and we think you could do a much better job. We want to invite you to redesign the Registry logo.

Sound cool? Think about how you could represent the concept of the Registry of Standard Biological Parts in an enticing, cool, sleek, slick, shiny, poppy, sciency, nerdy, sexy, accurate, hip new way. Post a design on this page for the community to see and comment on and make suggestions for tweaks and revisions. If everyone likes the final version, we'll use it, highlighting your creative genius for the entire Synthetic Biology community to see. And as if the glory isn't a good enough motivation, we're also going to give you a brand new Apple iPod or Nintendo Wii! (Just think about how fun a Wii would be in lab! :)

The mission of the Registry is to collect and provide standardized, reliable biological parts to enable synthetic biologists to design and construct biological machines. Parts are defined as bits of DNA that have been designed (and then often constructed) to have a particular biological function with defined inputs and outputs. The Registry acts as a clearinghouse for these parts as well as the biological devices and systems that are built from these parts.

The new logo should embody and convey the purpose of the Registry. Consider the principles of an abstraction hierarchy and composition. 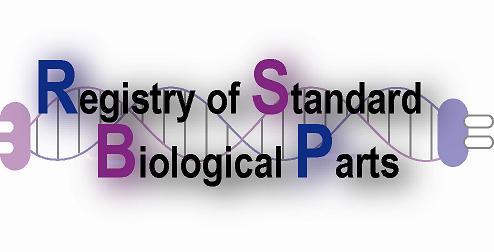 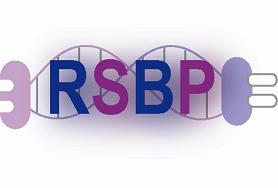 Though I think this is an appropriate and attractive design, I am not very good at Photoshop, so it would be best if some who really knows how to do picture editing touched it up. Here is my .psd file for those who want to make improvements. (The containing folder has some more files that you might find of interest.) I wanted to make a transparent background so that the background could be swapped out at will, but I could not get the magic wand to select the background without deleting some of the letters and balls at the bottom as well. David Hagen 18:20, 19 October 2007 (EDT)

A scheme from USTC

Vacuum tubes were the critical devices that enabled the development of electronics technology. In 1946 J. Presper Eckert and John W. Mauchly, both of the University of Pennsylvania, constructed ENIAC (an acronym for electronic numerical integrator and computer), a digital machine and the first general-purpose, electronic computer. Its computing features were derived from Atanasoff's machine; both computers included vacuum tubes instead of relays as their active logic elements, a feature that resulted in a significant increase in operating speed. (from Wikipedia)

This DNA vacuum tube is a fanciful part with some specific function. The Registry of Standard Biological Parts enables scientists to search for parts of different functions expediently, as described in the logo.

This logo is designed by Zhang Kuiwen from USTC (University of Science and Technology of China), whose Email is: zkw <at> mail <dot> ustc <dot> edu <dot> cn .

No third-party images are used, since the size of the design may probably be changed, which results in blurring. I also export a pic with transparent background in .png format (right one).

ZIP containing the SVG of both logos

As synthetic biologists, we have to take DNA and arrange them in just the right way to get the perfect result - kind of like a puzzle. Each piece is different but they are all part of the whole system. The variety of colors also represents the creativity of synthetic biology.

It's designed to be simple and clean. I originally intended to add small symbols of different parts or DNA to each puzzle piece, but I decided that simplicity would be best for a logo. This way, it can look good anywhere, no matter how small or how big. Designing with vector graphics allows this scalability, and lets you easily make logo merchandise :-)

Inspiration for this logo comes from Wikipedia's logo, which is like a sphere made of puzzle pieces of different characters symbolizing each language. The registry is a collaborative effort sort of like a wiki, so I thought it would be appropriate to make this logo.

Software used includes Adobe Photoshop, Illustrator, and Inkscape (Illustrator 12 has SVG export issues). The bacteria shape was borrowed from the iGEM logo, as well as the gear (in the second version of the logo). Puzzle pieces were hand drawn. Font is Frutiger Linotype (commercial font. here, it is changed into paths to avoid copyright issues, but an open source font may be better). Format of the image is SVG, so you can shrink/enlarge it as much as you want.

You can reach me, Arthur Yu, via email at akyu at berkeley.edu

This redesigned LOGO embodies the Registry of Standard Biological Parts using motifs and arrangements that succinctly, yet emphatically, conveys its mission and motivations.

The HOME motif is emblematic, symbolic, and functional. As an emblem, it represents the Registry's role as a collection and clearinghouse for biological parts all under one roof, as well as an upwards arrow to raise collaborative understanding of the emerging field of synthetic biology. It is also a symbol of the home organism chassis into which these biological parts are introduced. When appearing at the upper left corner of the Registry, it functions as a hyperlinked image to return to the Registry home page.

Each BRICK motif is standardized into an organic green "Bio-" and a robust red "-Brick" to epitomize the synergy of biological sciences with strengths of engineering paradigms, not to mention the stop and go nature of assembly. When combined, these abstracted BioBrick parts imbue predictable functions into a device, in this case the capital letter "R" for "Registry" and can be furthered into a system consisting of multiple letters such as the word "Registry."

The ABSTRACTION HIERARCHY motif is the infrastructure that buttresses the HOME and is reminiscent of the same schematic illustrated throughout the Registry (http://parts.igem.org/wiki/index.php/Abstraction_Hierarchy). Each level of this hierarchy is independent yet enables principled exchange of information between levels of components below and device above.

The COMPOSABLE motif is the building materials that constitutes the HOME and is represented by the compatible connecting of the BRICKs also highlighted in the Registry (http://parts.igem.org/wiki/index.php/Assembly:Composable). Many smaller component BRICKs are linked to each other and into one larger device "R" for Registry.

When the above are unified into a LOGO, it elegantly represents the best achievements and aspirations of the Registry. To succeed as such, it balances the integrity of the above multifaceted message with scaling to different dimensions for various media.

These original motifs and arrangements were all prepared using Microsoft Word 2003 and Adobe Photoshop CS 8.0 on a Windows Vista PC and no external source materials were used. It is released under the Creative Commons license with attribution requested to Faisal Reza (faisal(AT)alumni.duke.edu).

I wish make something colorful, joyful, and smart. I decided to design a logo which represent easily the registry function. In that logo appear a cabinet that represents the catalog. It keeps the biobricks information and it's a common place to share parts. I wanted that my logo shows some biobricks, and how I had the cabinet I putted it in its opened drawer. The nuts represents the modularity of the biobricks. 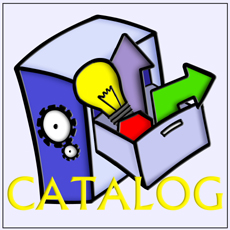 Here for a biggest view.

You can see how the catalog wiki would be with this logo. 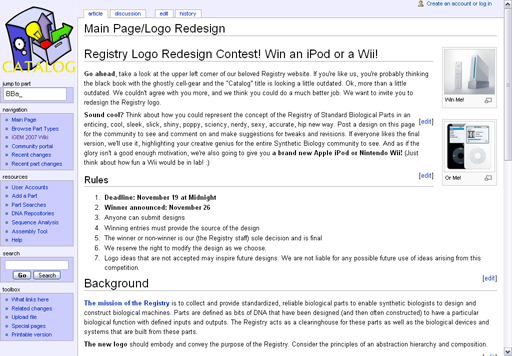 This logo has fully designed and created by E. Javier Garzon from the University of Valencia.

This image is simple and clean, showing a collection of biobrick's represented as gears. It was designed by Dylan Loney from the University of Calgary. The image is provided here in jpeg format but any other file format can be obtained by contacting Paul Adamiak at pjadamia@ucalgary.ca