< Back to Terminator Measurement Help 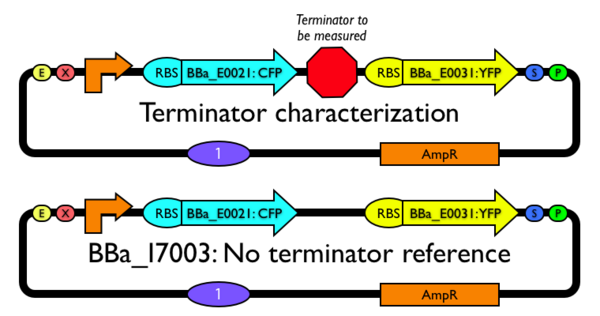 A series of terminator characterization constructs was built using BioBrick® standard assembly (Table 1). Each construct encodes ECFP and EYFP on a polycistronic message, separated by the transcriptional terminator of interest. The ECFP and EYFP (BBa_E0021 and BBa_E0031, respectively) used in this study were derived from Clontech expression vectors and include the native ribosome binding site ([1], [2], [3]). The wild-type lac promoter (BBa_R0010) drives expression of the construct. All constructs were built on pSB1A1) in E. coli strain DH5a (Figure 1). Characterization constructs were built for six terminators and their reverse counterparts (BBa_B0010-BBa_B0015 and BBa_B0020-BBa_B0025).

We measure termination efficiency by inserting each terminator between the coding regions for CFP and YFP on a polycistronic message and measuring the fluorescence ratio of the two fluorophores by flow cytometry. A control construct lacking an internal terminator (BBa_I7003) was used to determine a baseline YFP to CFP fluorescence ratio. Output from this construct was assumed to represent zero percent termination efficiency. Additional constructs expressing ECFP only (BBa_I7000) and EYFP only (BBa_I7001) from the same promoter served as positive controls for fluorescent protein expression.

Overnight cultures were inoculated from plated colonies in 5 ml of LB medium with 50 μg/ml ampicillin. Samples were grown at 37°C. In late log phase (OD600nm=~1.5-2), 1 ml of culture was pelleted, resuspended in 1 ml PBS, and stored on ice for analysis by flow cytometry. 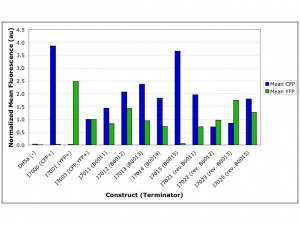 The other single terminator that we characterized was BBa_B0011, a terminator derived from the luxICDABEG operon of Vibrio fischeri and predicted to be bidirectional. BBa_B0011 had the highest combined forward and reverse termination efficiencies of the single terminators and was thus designated a “working” part in the Registry of Standard Biological Parts.

The negative termination efficiencies measured for BBa_B0022 and Bba_B0023 may suggests one of two possibilities.

Variability in CFP expression between constructs and decreased CFP expression in the dual fluorophore constructs compared to the CFP only control suggest that high levels of transcript expression are saturating ribosomal translation capacity (Figure 2). Since our constructs are expressed from a high copy plasmid (estimated at 100-500 copies) and a relatively strong promoter, high levels of transcript levels are expected. However, such a translation bottleneck might affect the correlation of protein and mRNA levels and reduce the fidelity of our surrogate measurement for termination efficiency.

This work represents a initial attempt to characterize transcriptional terminators as standard biological parts. We attempted to measure the forward and reverse termination efficiencies of five terminators from the fluorescence ratio of two reporter genes, encoded upstream and downstream of the terminator of interest. Using reporter protein fluorescence to infer relative transcription levels assumes that the mRNA stability and translation rates are insensitive to variations in the terminator sequence and performance. This assumption was not tested in this study. A subsequent generation of terminator characterization experiments conducted by Jason Kelly partially addressed these concerns by flanking reporter coding regions with hairpins and RNase E sites to better ensure transcript stability and independence.

Subsequent characterization of transcriptional terminators should improve on this work in four ways.